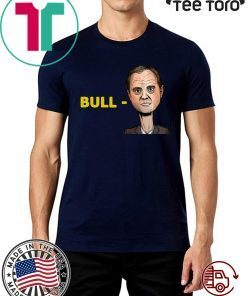 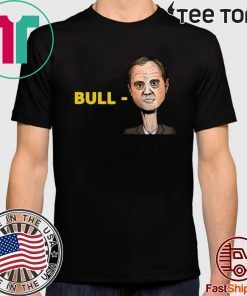 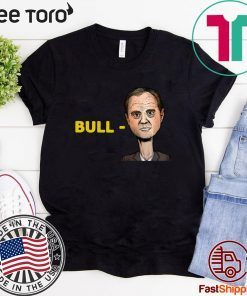 The T-shirt features the text “Bull” alongside a caricature of Schiff with an extended neck. The description for the T-shirt states, “Don’t let Adam Schiff get away with the bull-Schiff Ukrainian investigation.”

“Americans can plainly see the Bull Schiff that’s going on in the sham impeachment hearings and now they can make their feelings known with these great new t-shirts,” Brad Parscale, Trump campaign manager, said in a campaign release, reported the Hill. “President Trump’s supporters aren’t shy about expressing their opinions and we know they will just love these new designs.”

The new merchandise is among other featuring texts “America First,” “Border Wall Construction Co.” and “Trump 45 – It Ain’t a Mistake Snowflake.”

The new shirts were released as Schiff led the fifth day of public hearings as part of the impeachment inquiry, in which Schiff and his fellow Democrats have accused President Trump of abusing his office to interfere the 2020 election campaign.

Schiff, who helped lead the investigation into Russian interference in the 2016 election, has tried to impeach President Trump of engaging in a quid pro quo in forcing for Ukraine’s leader to investigate his political rival in exchange for military assistance to the country.

Schiff that the president’s actions were a “conditioning of official acts for something of great value to the president. These political investigations—it goes right to the heart of the issue of bribery as well as other potential high crimes or misdemeanors.”

Schiff’s leading role in the Democrats’ investigation with his “regime of secrecy” and controversial contact with the anonymous whistleblower who sparked the impeachment inquiry, has drawn harsh criticism from Republican lawmakers and President Trump who repeatedly portrait him a “liar” and

There are no reviews yet.

Production Time: All orders are processed within 5 - 7 business days. Processing Time: It takes 1 - 2 days to ship your order to our warehouse, put your name and address on it and ship out. Shipping Time: You will receive your order anywhere from 7 - 15 business days (depending on the shipping method you chose) from the date that it is shipped out, not the date the order is placed. Shipping Cost: The Standard shipping price is $4.99 (4-7 business days). Order over $49.99 for our FREE SHIPPING Return & Exchange: If for some reasons you are not happy with your purchase, we will happily work with you to correct the problems. Items can be return/exchange and get Refund within 30 days of delivery date. Tracking Number: When available, we will send you the tracking number with the confirmation email so that you can track the package online. If you have any other queries, please feel free to email us.